Burmese Military’s Hidden Chemical Weapon Factories: Catch me if you can? 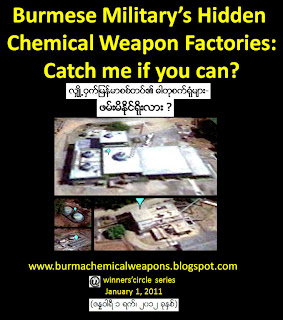 According to news from the war zone on October 30, 2011, a series of fighting between Kachin  Independence Army (KIA) and Burmese army at Garayan, Shwe-nyaung-pin, Lon-zut-kon villages, and In-thut hill near Laizer KIA headquarters.  (See map below) Due to the higher causalities with the government troops, it appeared to be that the military has started using chemical weapons which is restricted in the internal warfare by the UN.  According to the KIA sources, soldiers got dizzy, vomited and collapsed after breathing the smoke from exploded shells from Burmese (military) mortar shells.  The chemical shells must have been used with 81 mm and 120 mm mortars, according to some local analysts.  (source: http://photayokeking.org/hot-news/787-daduleknet in Burmese) 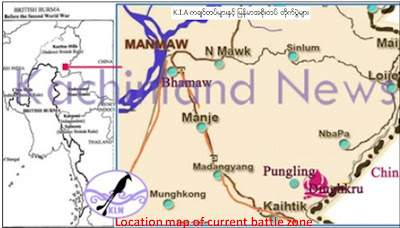 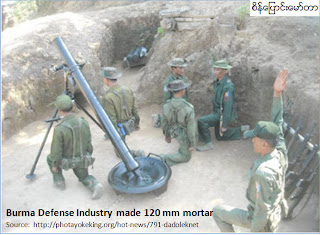 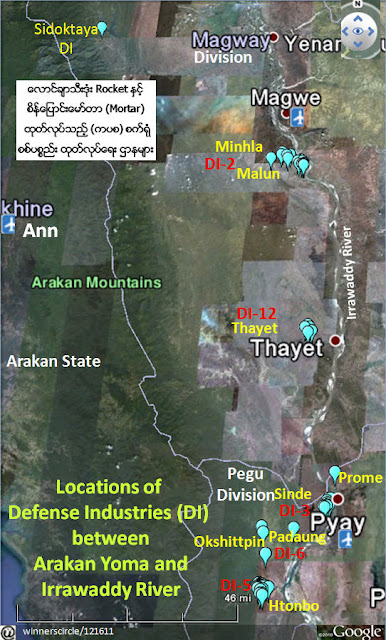 Using a series of 2009 satellite imageries posted on Google Earth™ , the DIs mentioned above were able to identify along the western side of Irrawaddy River.  Since under the rule of late dictator Ne Win, many of the DIs were established, but after Than Shwe seized power in1992, more DI installations were expanded inside rugged mountains located eastern edges of Arakan Yoma (Ranges).
No (2)  DI Complexes (Minhla/Malun)
This DI has been designed by experts from Singapore Government Technology Company.  It’s a site for testing weapons coming from Singapore.  DI #2 has produced 105mm artillery, 120mm, 81mm, 60mm mortars and MA-5 machine guns.

DI #2 complexes have been spread out in Upper Minhla District.  The newest establishment was located at a place in rugged mountains, one and a half mile south of Lebingyin village and eight miles west of Minhla (town).  In comparison to 2007, this DI was still expanding in 2010. 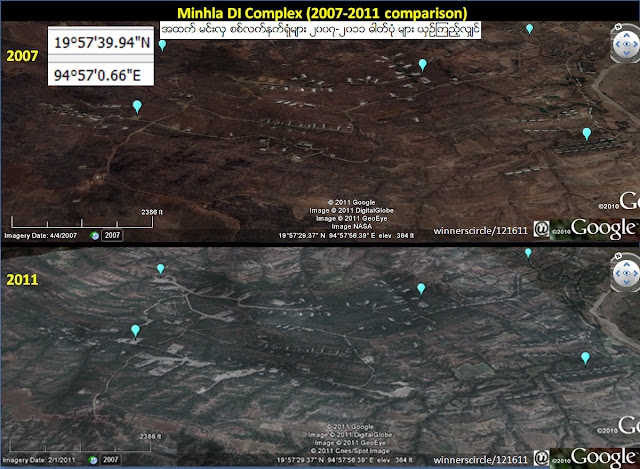 This DI complex was found at a flatter basin surrounded by rugged mountains, located five miles west of Minhla (town).  Most of the structures appeared to be warehouse type of factory or storage.
﻿Malun (town) is located three miles south of Minhla (town).  The military factories were well established since the dictator Ne Win’s era.  The factories were built on the foothills on the southern rim of the town.  There were no traces of established chemical structures in there. 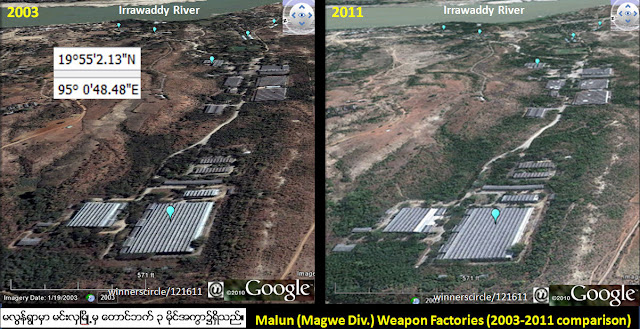 ﻿
No (12) DI Complexes  (Thayet)
No (12) DI is located near Sakhangyi village, Thayet Township, Magwe Division.   Shells of 105mm artillery, 120mm,81mm, 60mm mortars have been produced here.  Weapon technology here was introduced by Daewoo Company of South Korea for body of the shells.  The internal parts of the shell was taught by a company from Czech Republic which then left after Czech became a NATO member. 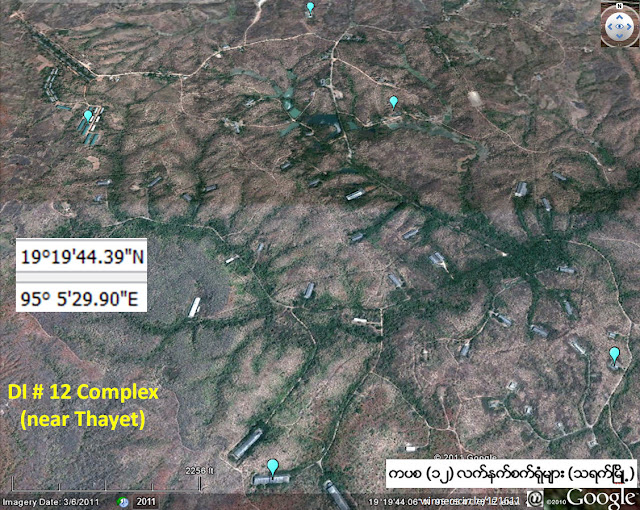 This DI #12 Complex is located 6 miles west of Thayet (town) located specifically in the rugged maintains.  The structures appeared more of a warehouse or storage type of factories.
No (3) DI Complexes (Sinde, Pegu Division)


Since the dictator Ne Win era, DI #3 complex was built at Sinde Village, Pantaung Township, Bago Division.  Its primary responsibility is to manufacture for ammunition that it produces 40,000 shells monthly for 105 mm artillery gun, 120 mm, 81 mm and 60 mm mortars. 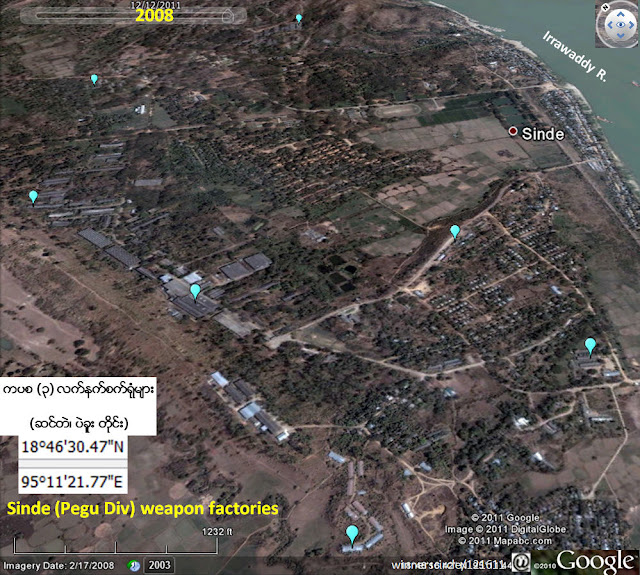 Sinde is a village located on the west bank across the Irrawaddy River from Prome.  It is one of the oldest DI establishments.  The factory buildings in 2008 appeared to be the same shape as those seen in 2003 satellite photos.
(No) 6  DI Complexes  (Padaung, Pegu Division) 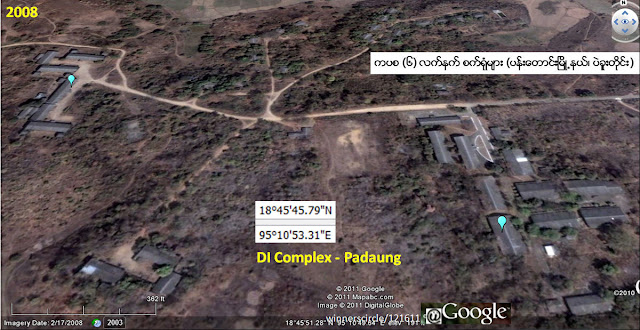 The DI structures near Padaung (village) are about the same age of those in Sinde.  DI #6 was responsible for producing bullets shells and copper plates for small arms.  It was designed and built by Chinese. 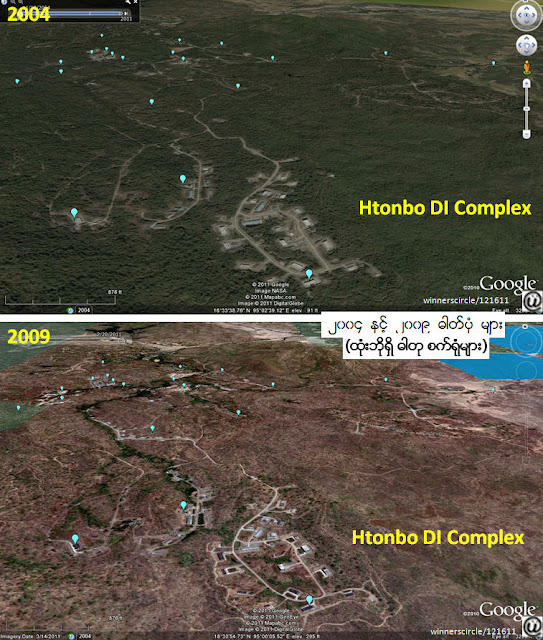 This site is located 6 miles west of Htonbo village on the west bank of Irrawaddy.  This DI complex has been built on a hilly terrain, but not in rugged maintains like the other complexes.  It must have been built in the 1990s.  More structures had sprawled between 2004 and 2009.  There was no documentation on this DI.  The author now exposed its existence by interpreting satellite imageries on Google Earth.  The following photos will show significant structures revealing the production of chemicals inside Htonbo DI. 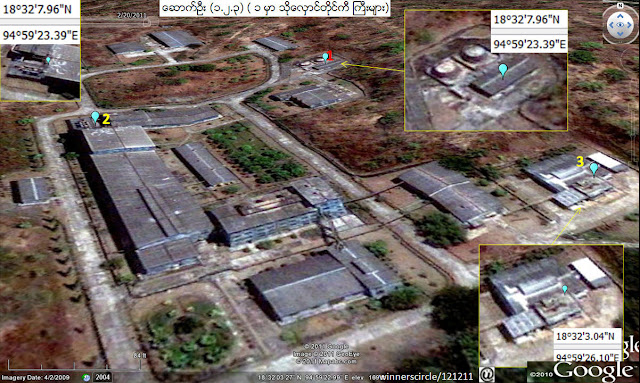 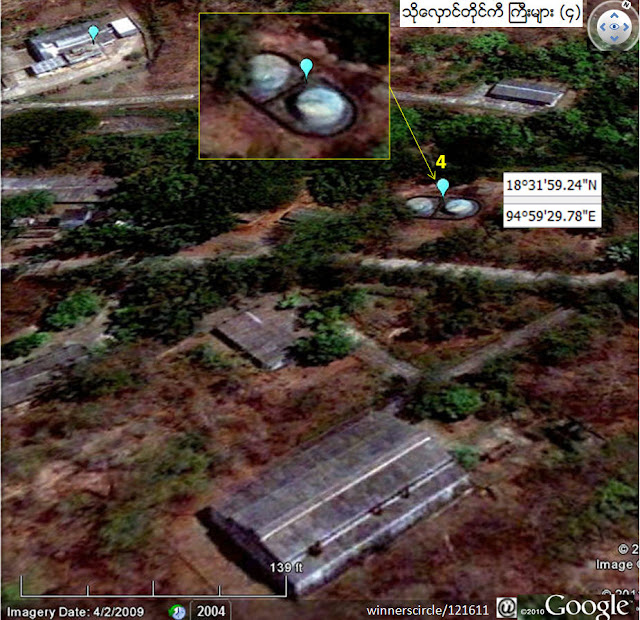 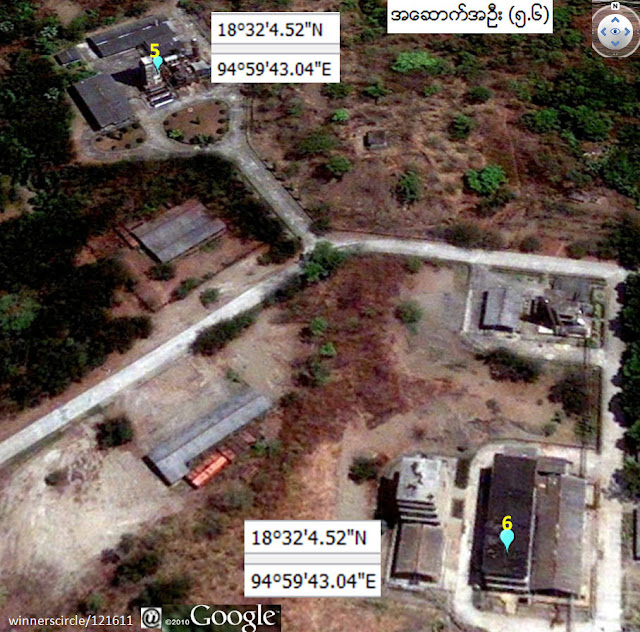 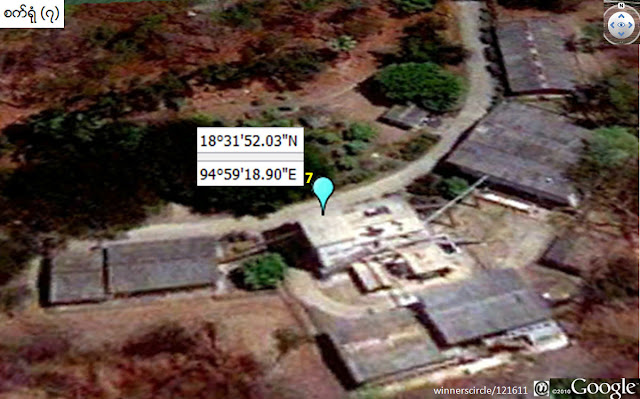 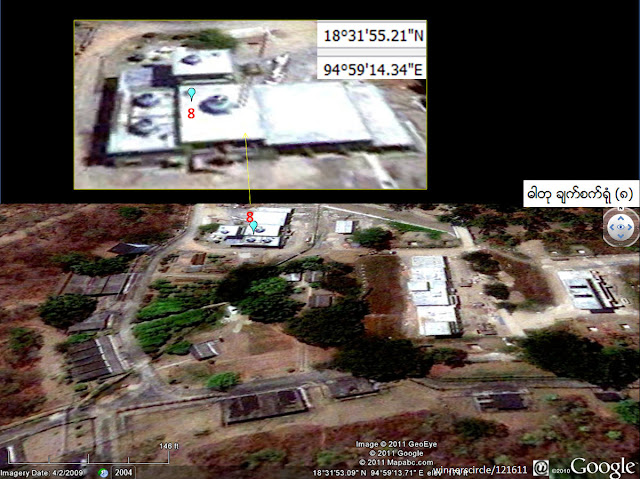 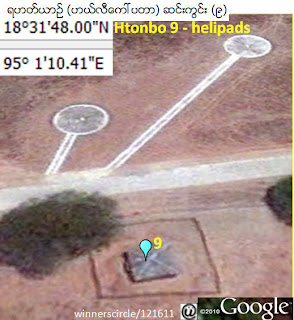 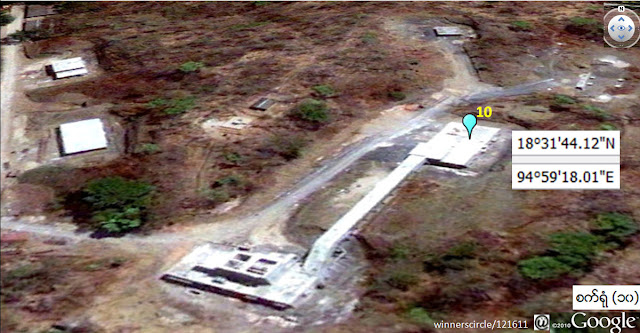 The evidence that the existence of chemical factories in this DI can be seen on the photos above, now.  After previewing the photos, Mr. Robert Kelley (SIPRI) who has examined satellite imageries throughout his career, confirmed that there were chemical factories.  Maj. Sai Thein Win (a defector Burmese military engineer) confirmed that explosives were produced in DI #5 while he was visiting this complex once.  He was informed that HCl acid chemical production has been stopped.  Ex-major Aung Lynn Htut (a defector Burmese senior intelligence officer) believes that those who were working in this complex may not know if the chemicals would be used for weapons.


KIA sources reported that some rocket shells exploded in the air, and the others on the ground.  Major Sai Thein Win, in his analysis on the possible production of Burma’s chemical weapon in http://burmese.dvb.no/archives/18626, explained that air-born explosive could be possible to make by using chemical agent instead of smoking agent, placing inside the shell of 84 mm rockets.  But he still believes that it is still too delicate to install chemical agents inside the 81 mm rocket propelling grenades produced at the DI facilities.
Catch me if you can!
The 1993 Chemical Weapons Convention bans the production and use of chemical weapons. (http://www.opcw.org/chemical-weapons-convention/)  Burma is accustomed to using chemical weapons during the battles against MTA Khun-sa arms forces, and Karens. Once, Maj. Aung Lynn Htut was at the battle field during Burmese soldiers heavily lost by Karen resistance.  His attempt to investigate the use of chemical planted shells by Gen Maung Aye's plan who was inspecting the battle field, failed.  Maj. Htut explained that those soldiers or the commanders might not even notice that they were using chemical weapons because the shells (rockets/projectiles) installed with chemical agent looked the same as the regular conventional shells, and they were all mixed together in the shell cases (boxes).
Production of chemical weapons has been a top most secret even within military apparatus.  Once, the military intelligence service (MIS) branch had to back out of the attempted investigation inside the DI facility where explosives were produced (near Aung San Suu Kyi was house-arrested).  The MIS’s effort to get access to the site was denied by the Infantry Branch.  (http://photayokeking.org/hot-news/791-dadoleknet)  Burmese military normally use mild mustard gas, so that the effect is not fatal but effective; and the gas disperses in a few minutes.  They leave no smoking gun.
The Burmese army would say, “Well, catch me if you (the OPCW - Organization for the Prohibition of Chemical Weapons) can?
Conclusion
Interestingly, a video link came to me with a report on another allegation of the use of Burma army's chemical weapons against karenni resistance soldiers in Kayah state.  This British Channel 4 report revealed that there were medical doctors from California, USA, at the fallen Burmese camp site, and that the doctors were examining victims to prove the use of chemical weapons.  The readers may view this video at: http://www.youtube.com/watch?v=y7rfScFveZU&feature=share

It sounds funny for so-called President Thein Sein and Sr Gen Min Aung Hlaing for being able to use sneaky tactics of using chemical weapons.  Burma has signed in CWC that it's no joke using chemical weapons against minorities, or anyone because it is a violation of war crime act.  Currently,   it is about to appointing an official Commission of Inquiry to investigate alleged war crimes perpetrated by the military rulers of Burma.  No doubt, so-called retired Sr Gen Than Shwe who is still pulling the strings to Thein Sein and Min Aung Hlaing, will be enlisted as the number one war criminal.  Probably, Mr. President of Burma and Mr. Senior General of Burma should now realize that who would be next in line in war ciminal list after the god father of Burmese military?

Note:  This observation is based on the interpretation of satellite imageries taken in 2009 and before that were posted on Google Earth.  Once 2011 photos are available on Google, more expanded military weapon factories can be identified.
Acknowledgement:  Google Earth™ , Rober Kelley (Austria), Sai Thein Win, Aung Lynn Htut,  The Power of Fraternity website, DVB, Kachin News Group
(This document in Burmese language could be viewed at: http://photayokeking.org/.)
(The Burmese version can also be located in the facebook at "Jhango Win".)
///  end
Posted on January 1, 2012 by winners’circle
Posted by Winners' Circle at 11:53 AM 44 comments:

Winners' Circle
Special dedication to the students who assisted my research efforts back in those days in Burma. After decades later, I still have quite a bit of raw materials and new tools to generate and fill some information gaps about Burma. I will continue contributing my efforts in changing of the course for a free Burma.